When I first came to Israel for a semester of high school in 1983, I found a quiet place to write in my journal that quickly became known in my mind as “my spot.” Just down the road from my dormitory was a ridge overlooking Jerusalem’s Old City. I would sit and write on a large boulder next to a dense grove of trees with a view of the Biblical City of David below me. David’s city formed a triangle, sloping down between the Kidron and Hinnom Valleys, its point facing me. Above David’s city stood the Old City’s golden walls. It was not hard to imagine how awesome the Temple must have been towering over ancient Jerusalem. From my spot I traveled through time reconnecting with my people and my land, transcending the generations. 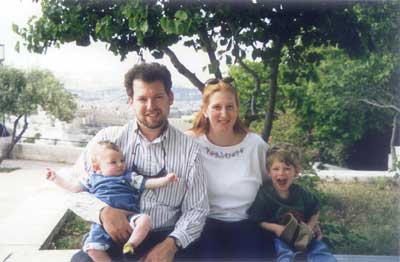 Jerusalem is steeped in history. Growing up in South Jersey at the time of America’s bicentennial, I was given a strong appreciation of history at an early age. I was thrilled every time I drove by the Liberty Bell and each time I saw the pre-revolution buttonwood trees lining Haddonfield’s King’s Highway. However, before coming to Israel I had never experienced such a strong connection to a physical location. Looking down at the Temple Mount from my private viewpoint, I was awestruck. For three thousand years Jews had yearned to see what I was privileged to view every day. They had said it in their daily prayers, in their poetry and literature and of course at the end of every seder “Next year in Jerusalem.” How absolutely incredible it was that I should be able to sit overlooking the magical mystical city of Jerusalem! That tremendous feeling has never left me. It is a feeling of connectedness to The Land; a feeling of belonging and humble appreciation.

With so much time having elapsed since my ancestors came to Jerusalem, every location in the city has multiple layers of my history, many stories to tell.

It was from my very spot, where I used to write in my journal, that Abraham first saw Mount Moriah, the place where G-d commanded him to sacrifice Isaac, the same place where the Temple was later built. Standing in his footsteps, looking at the Temple Mount I bond with the very first Jew.

In the opposite direction, looking away from the Temple Mount and towards the Judean Desert, is a volcano-shaped mountain, south of Jerusalem. This is Herodion, built by Herod the Great, builder of Masada and Caersarea, and rebuilder of the Temple itself. Below the ridge, right under my feet, are the remnants of the aqueduct that carried water from Solomon’s Pools, past Herodion, through this ridge on its way to deliver water to the Temple.

More recently between 1948 and 1967, this ridge was no-man’s land; a buffer between Israel and her enemies. On one end, behind the grove of trees next to me stands a large complex which used to be the British high commissioner’s headquarters when the British controlled this part of the world. Today it is the UN’s Middle East headquarters. On the other end to the west was an Israeli border police station.

This is the ridge where on one axis the desert borders Jerusalem and on the other axis East and West Jerusalem are joined. There is an Arab village to one side, and a Jewish neighborhood to the other with the Christian convent of Saint Claire in-between. Looking to the right, are flat houses, no more than three or four stories built in the Arab style while to the left are the high-rises of West Jerusalem. As is obvious from the architecture and the surrounding landscape, this is the very point where East and West meet. It is a remarkable sight. Below this ridge, linking East and West Jerusalem is a forest, the Jerusalem Peace Forest, planted in the hope of unifying the city and its residents. The forest is a symbol of an optimistic future and as a sign of this hope, a tree is planted by the JNF and the Jerusalem municipality for every child born in the city.

Unfortunately, wherever two cultures meet, there is conflict and part of the history of this ridge is war and the loss of life. In 1967, the IDF’s Jerusalem Brigade took this ridge completing the reunification of Jerusalem. There is a monument here honoring the memory of those who sacrificed their lives. Being here, in this context, I cannot help but be humbled by their sacrifice and appreciate the privilege of living life in this eternal city.

Soldiers from the same brigade were on reserve duty at the Suez Canal on Yom Kippur in 1973, six years later. Since it was a fast day, they were mostly relaxing and were completely taken by surprise when Egypt attacked. Seventy-six of them were slaughtered in the Sinai Desert. In the forest below, tying our hopes for a peaceful future with the memory of a violent past is a monument erected in their memory.

In high school, when I came to this ridge to write, it was quiet and unpopulated. Twenty years later the single lane road has turned into a main thoroughfare with two traffic lights and a traffic circle. The border police station, which had been at the western end of the ridge, has been torn down and luxury apartments built in its place. The most significant change to me is that the boulder I used to sit upon is gone. There is now a restaurant in that spot and a beautiful promenade drawing many people to my special place, appreciating my view.

I returned to this same neighborhood when I studied at Hebrew University during my junior year of college. Facing the promenade were the apple orchards of Kibbutz Ramat Rachel. I used to cut through a hole in the orchard’s fence to cross from the neighborhood of East Talpiot where I was living to the house of Israel’s Nobel-prize winning author S.Y. Agnon. His house, where I would attend lectures, is now a museum tucked in the neighborhood of Talpiot. 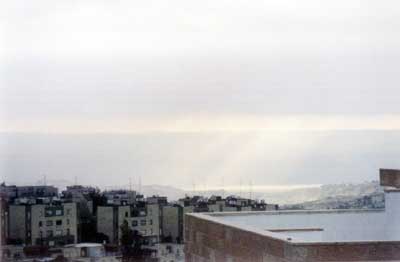 Today I live half a block from S. Y. Agnon’s house just within the pre-1967 border. My balcony looks across the former apple orchards, now a new housing development, and on a clear day I can see the Dead Sea and the red mountains of Jordan on the horizon. The developers have continued the promenade through the new project so it is now only one block from my home. Jerusalem continues to grow and develop. We are building our future in the city of our past. Directly across the way, in East Talpiot is my synagogue where my four year old attends nursery school. It is less than a ten-minute walk away.

Jerusalem is a city of neighborhoods. Talpiot is a pre-state neighborhood with many old pine trees lining the streets. It is a mixed neighborhood with Jews from all over the world. Within such a segmented society as Israel, Talpiot is shared by various types of Jews. There are ultra-Orthodox, religious, traditional and non-observant Jews. There are Ashkenazim and Sephardim, immigrants and natives. It is common to go to the park on a Shabbat afternoon and hear a mixture of French, Hebrew, English, Spanish and Russian. 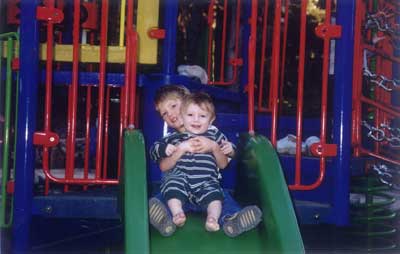 The park, Gan HaHorsha (The Park in the Grove) as it is known, is the center of life in Talpiot. As the name suggests, it is filled with trees and is nestled between two neighborhood streets. On Shabbat it is packed with children playing. As parents, we come there to supervise our children, but it also provides us with a wealth of contacts and information. In our busy lives, this is where we go to catch up on what is happening and it is where we go to meet people. I often reconnect with old friends, some of whom I have known since high school and college in the U.S. Like parents the world over, we discuss our children, their schools, politics, religion and recent events. However, this park is different from the locations of similar conversations. Listening to all the languages, I cannot help but have a sense of homecoming. We are truly ingathering the exiles. Despite our differences, we are family. This is evident in how we support each other and care about one another’s children. The passion and knowledge of the conversations in the park are also telling of how much Israelis care about their country and its future. Together we share a mutual destiny, shaped by the contributions of each member of our people. 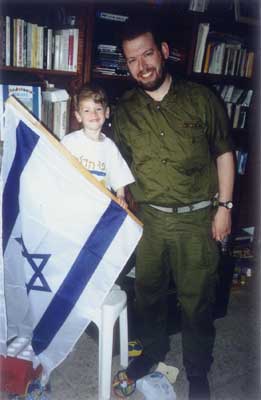 Within a few blocks of my house I can travel through history. I can stand where Abraham stood. I can see the City of David and the site of Solomon’s and Herod’s Temples. I can visit the home of a Nobel Laureate who was the pride of his people. I commemorate the soldiers who fell in battle so that our Jewish state would survive. I listen to the laughter of our children. I envision our future, living in peace with our neighbors and represented by the forest connecting us having been created one tree at a time, one tree for each child born in our city.

As a Jew, I am in awe every day as I look around my neighborhood. I never take it for granted. Each day I am filled with wonder and appreciation that I should be afforded the opportunity to fulfill my dream and the dream of my people. This is my history. This is my place. I am rooted here. After so many years of wandering, when no Jewish family has lived in any one place for more than just a few generations, we have reversed history and reclaimed our land. And I am happy to finally be home.